I see a lot of things online that I think people might enjoy, so I started a music blog called AUSCULTATIONS. Check it out!

What a crazy fall it’s been!
Zoophilic Follies premiered at Redcat, Sigils premiered at Pianospheres – seems like I’ve been working straight since August…
Now it’s off to Kazakhstan to work with Anne Lebaron and Timur Bekbosunov on The Silent Steppe Cantata!
After that, I will be finishing up a whole slew of recording projects, including a Dime Museum album, a studio recording of Zoophilic Follies, and an album of my Diasporic Music series.
See you soon!

Pianospheres was a blast on Tuesday! Vicki rocked a lot of difficult premieres, and it sounded wonderful! Check out a review of the concert in the LA TImes:

On November 15, the amazing pianist Vicki Ray will premiere my solo piano piece, Sigils, at Zipper Hall as part of the Pianospheres series! Come check it out

Whew! Just got back from a West Coast tour with Timur and the Dime Museum – played some great places and hung out with some amazing people!
On October 30 the Dime Museum will be doing a special Halloween show at The Echo!
Then, on November 15, the amazing pianist Vicki Ray will premiere my solo piano piece, Sigils, at Zipper Hall as part of the Pianospheres series! Come check it out 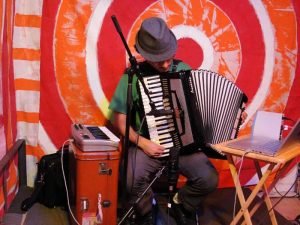 The NOW Festival was a blast, but alas it is over… My puppet opera, Zoophilic Follies, was a hit! We are going into the studio to make a decent recording of the music, so stay tuned for that
Last night I played a new piece for accordion and laptop that streamed live on Ear Meal! Thanks goes out to Alan Nakagawa for having me on. The video is streaming on the Ear Meal website, so check it out!
Timur and the Dime Museum will be travelling up the coast in a few weeks to perform a few shows in Seattle and Portland. More info soon! My new puppet opera, Zoophilic Follies, premieres September 22-24 as part of the NOW Festival at RedCat!

What a great month!
A whole slew of shows went wonderfully – so good to see and hear so many people
Lots of recording over the next few months!
Timur and the Dime Museum is recording a second album, and I am also putting together an album of my Diasporic Music pieces thus far.
In the meantime, here is an mp3 of Matt Barbier premiering Diasporic Music #5: Travel, at the Donald Wright Auditorium in downtown Pasadena:
DIASPORIC MUSIC #5: TRAVEL– 6:52 (2011)

June 29
Orin Hildestad and Matt Barbier will play two of my Diasporic Music pieces at a Dogstar Orchestra concert. Orin will play #4 and Matt will play #5. They will be paired with some of Lucky Mosko’s Indigenous Music, which they were partially named after. The concert is curated by Christine Tavolacci. 8pm at Calarts’ Wild Beast.
July 1
I’ll be doing a short solo set at HM157. It will be an awesome night of solo sets by Jessica Catron, Emily Lacy, Tamala Poljak, Stefan Nelson, and Marisa Anderson. Organized by Jessica Catron
July 3
The Wulf takes over MOCA! My accordion octet, Free Reed Conspiracy, will play my Neotrope. Not only that, my giant music boxes will be on display, as well as a new card set called Excursions. Come on down from 1-4pm!