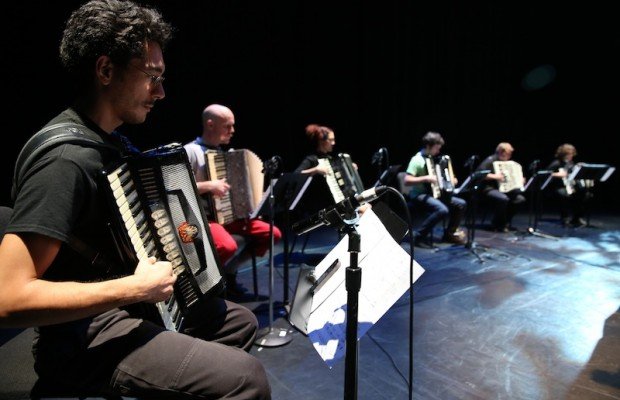 DISLIKE is a 21st century operatic documentation of a unique repository for the darker emotions swirling around the Internet. The sinister side of online anonymity and open-forum communication is examined by deconstructing 24-hours worth of comments on the most “disliked” video on YouTube. Taken as a singular libretto, the result is a surreal text full of anger, naivety, homophobia, desperation, and mischief. Meanwhile, eight accordions create a lush, post-ambient sonic environment inspired by a time-stretched interpretation of that video’s song. The resulting dichotomy depicts the Jungian shadow of the digital collective unconscious.

Dislike was premiered at REDCAT’s 2013 NOW Festival after a workshop at the Electric Lodge’s High Voltage Series! It featured Free Reed Conspiracy and The Peoples Microphony Camerata.

Read my article on LA Stage Times about Dislike

Living Out Loud Los Angeles: “This was truly a treat for all, from our soft spoken dreamers to our extroverted realists, we all went home with a true image of how ugly we can be and how much help we all owe each other.”

Musings by a Dancing Poetess: “By the end of the piece, I hated YouTube; I hated the Internet, and I would have given anything to make it stop. But, my experience of discomfort was what created the power in the Corral’s social commentary.”

LA Weekly: “Composer Daniel Corral, whose work probes the weirdness of 21st-century living, has written a libretto called Dislike, about the most disliked YouTube video of all time.”